Deodi of Khursheed Jah Bahadur* (Khursheed was also awarded the titles of Shams-ud-Daula II, Shams-ul-Mulk II, Shams-ul-Umrah II, Khursheed-ud-Daula, Khursheed-ul-Mulk,Imam Jung, Amir-e-KabirI) was located in the very heart of Shah Gunj, Old city of Hyderabad. The major landmark near to Khursheed Jah deodi were Charminar and Mehbub Chowk in the North- East quadrant, Iqbal-Ud-Dowlah** (Brother of Khursheedah Bahadur) Deodi to its East and Chau-Mahalla Palace in South-East quadrant. 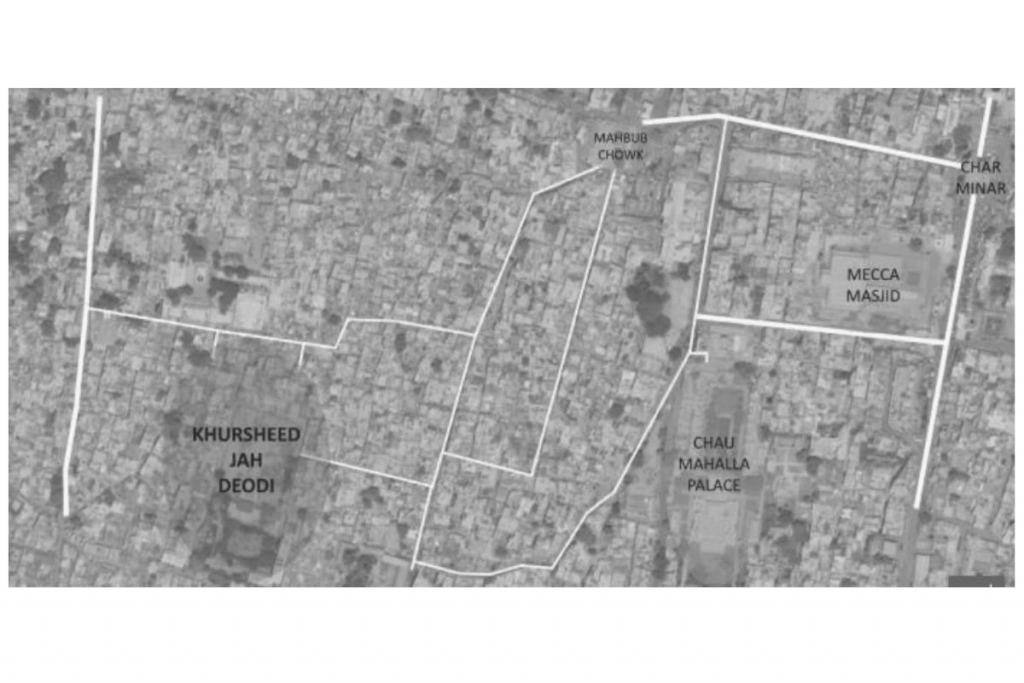 The Deodi was well connected to the street from three sides:

All three streets have definite entrance gateways to the Deodi: 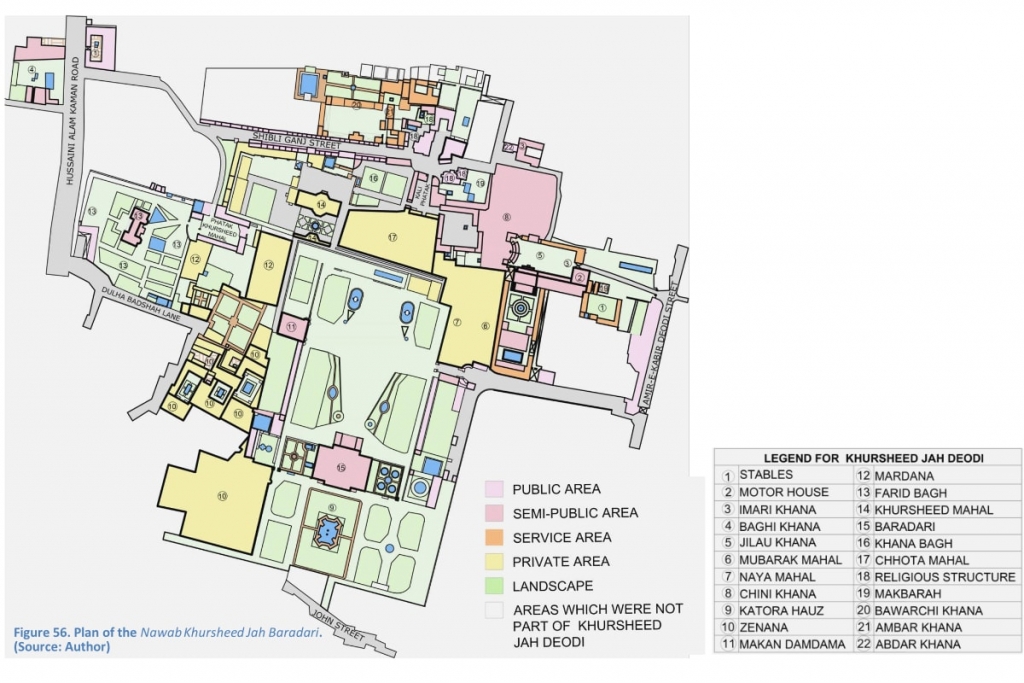 Khursheed Jah Deodi had a large building complexes separated by various Baghs in between consisted of single to double storied building blocks on the site.

Situated at Hussaini Alam Kaman Road, Bagghi Khana of Khursheed Jah Deodi was a tin shaded single story structure for keeping the big Phaetons which were drawn by four horses. Visitors Rath or Bagghi were parked on the left side of the Hussaini alam Kaman road while the Bagghi’s owned by Nawab Khursheed Jah had a separate sheltering place opposite to the Visitor’s Bagghi Khana.

Directly attached to the Shibli Ganj Street was the Kali Phatak which was supposedly the entrance to Chhota Mahal. A Small low gate in a great wall guarded by a Zenana Palton (female soldiers) was present opposite to the Kali Phatak’s entrance courtyard. It belonged to the women section of Khursheed Jah’s family. The lofty stone walls were plastered with mud plaster.

Chotta Mahal was a two-storied structure with great, deep Verandahs surrounding it on all sides. There were four Zenana, each of them had hundreds of rooms for the 4 principal wives and 100 concubines. The courtyard at the entry gate measured 30 by 15 metres and had a central fountain with a big tree in the corner.

At the end, near the entrance there were two several small rooms occupied by Mamas (women servants). The two long sides had farm doors opening. Each of these doors, opened into square shaped dark room of about 3 or 3.5 metres without windows and furniture. The floor, walls and ceilings were plastered over with mud. At the opposite of entrance gate was a deep Dalan supported by pillars at short intervals. Special rooms were created in the Zenana for the purpose of child birth, Nikah (marriage ceremony), dressing room for the bride etc.

It was the Revelry, a place for fun merrymaking space.”Ishrat Mahal” for many years was used as a courtroom of Khursheed Jah Bahadur.

It was the living quarter of Khursheed Jah Bahadur in the Deodi. Being a two storied Mardana entry to this structure was restricted to few people. The “Khawas Pura” (residential quarter of the men servants) was connected to the Mardana.

This was a single-story structure situated in the north corner of Khursheed Jah Deodi. It was attached to the wall of “Madarsa-e-Nizamiya“(A school). Bawarchi khana had a big central courtyard with a small rectangular reservoir in one corner. A Verandah runs through the length of the courtyard. Behind the north-sided room was a big vegetable garden having a central circular reservoir.

It was the “Granary” located on the east Verandah of the Bawarchi Khana.

Sitauted on the Shibli street, an Ashurkhana was typically a mourning place (in this case) used by Khursheed Jah’s family. It was open to public only at the time Muharram (a Muslim festival). A Makbara (Graveyard) for the family was attached to the southwall of the Ashurkhana.

Khana Bagh was a formal open ground area with few buildings around it. It had distinct variety of various trees and shrubs. It acted as a space where the cavalry was asked to wait.

Koti ka Bangla also known as Khursheed jah’s Baradari (Pavillion) is the only remaining structure of the Deodi. Architectural plan of the Baradari is influenced by British Residency, which is built in European style. Initially Koti Ka Bangla served as a Courtroom. Later on, it is used as a leisure palace for greeting the European visitors.

Built over a high Plinth, adorned with different coloured Italian tiling this double storied structure has a single barrel-vaulted pavilion at the top. The ground floor of the structure consists of the various flight of steps landing on to the first floor.

Being symmetrical in plan, the first floor consists of the double heighted North entry porch connected to room-1 and room-8 on east and west side respectively through the doors and opens up into a central hall. Moving forward from any of the five doorways on the south wall of entry porch one lands up in a hall which is connected to a circular room-7 to its east and a square room-2 to its west.

South wall of the Hall has three doors which directly connects the stairwell and the South entry porch. The stairs are made up of wooden planks pivoted into the wall by iron rod. The east wall of the stairwell connects the room-6 and the toilet while the west wall is attached to room-3 and another staircase to first floor acting as a covered passage for the Zenana.

The South entry porch can be directly accessed directly through a flight of steps. The South entry porch have room-5 with toilet on the east wall and room 4 on the west wall. The south side of backside porch of the Baradari have six double paired Corinthian column supporting the flat wooden false ceiling.

The inner walls of the Pavilion are completely done in Rosewood while the Rafters and Purlins supporting the ceiling are Burma teak wood. The cornice above the lintel level is a fine piece of stucco-work with dentils and various geometrical patterns. The pilasters projecting on the walls gives the appearance of a supporting column but they only have an ornamental function.

Room 13 and room 10 are octagonal in plan which lies on east and west side of the hall. The north wall of the hall opens directly into the double storied entry porch. Room12 and Room 11 are directly connected to room13 and room 10 respectively. The stairs attached to Room 11 are meant for the movement of Zenana.

Room 12 being the bedroom have attached toilet which is furnished with ceramic tile till the sill level and have a Jack arch ceiling of brick & lime mortar. Room 11 and 12 both opens up into the Terrace.

The elliptical arches in the interiors are richly molded on around the perimeter and its enriched panelling is exquisite and the old big rafters have given supports to the roof deck and its associated heavy loads till date absolutely in a super condition that designed excellently keeping in mind the European neo- classical influence.

After climbing 50 steps of 100 mm riser, the landing opens up into a spacious hall of second floor full of light and ventilation. The thick stone walls in lime masonry is finely plastered with Stucco. The first floor consisted of rectangular- room 9 and room 14 in the front zone.

The glass used in the doors and windows is simple clear glass but the amount of heat entering inside the room is significantly reduced due to corridor surrounding the rooms and yet ensuring sufficient daylight level because of diffused sunlight.

There are ventilators being provided in order to ensure proper light levels along with movement of hot air outside the premise without the use of any mechanical means.

The roof plan consists of a single barrel vault and two rectangular structure. Tandur tiles were used in the flooring of the whole terrace.

The single storied bow trussed barrel vault is a pavilion in the north side of the roof facing towards the Khursheed Bagh. This vault has five opening on each north and south wall while two opening on each east and west wall. The flooring is done in herring bone pattern in brick which is finished with lime mortar.

The two rectangular single-storied independent structure on east and west corner. The entry to the terrace is from the Staircase attached to the Room 3 and 11 on ground and first floor respectively. Both these separate structures have openings on two sides towards the Terrace.

Tara Hauz was a reservoir in the South zone. It was present in the centre, between the Dalan and the backside of the Baradari (Koti ka Bangla). It was named Tara because of it star shape and was made up of stone with a central stone fountain.

It was accessed from a covered arched passage near East entry Phatak directly opening into the south Dalan of Mahal Katora Hauz. Being rectangular in plan, Mahal Katora hauz consisted of circular bowl shaped Hauz with a fountain in the centre surrounded by two storied Dalan on north and south sides while a single storied Verandah runs throughout the East and West sides. Behind the south Dalan of Katora Hauz was once existed a Big rectangular reservoir with beautiful lamp post on all four corners.

Chini Khana was a single storied which was meant for storing and displaying the various types of china ware. The walls of the Chini khana were adorned with china plates, an arcade on the fourth side formed an enclosure with carved recesses or niches in the walls to hold small porcelain or clay vases.

The new apartment made by Nawab Khursheed Jah to cope up with the prevalent architecture of 20th century.

It was more of a courtroom where the day to day counselling was provided by Nawab. It was more likely to be a Palace where people were treated with more kindness.

It was a unique leisure palace with exotic garden It was two storied structure and an important part of the Mardana.

Naqqar Khana or Naubat Khana was a space where musical instruments were stored and played ocassionally.

It was the Military Guard Quarters. It was a single-story structure with a basement. The entry was through a flight of steps on both side of protruded front façade. The façade of this building had diamond shaped Jali pattern done in stucco.

It was a place at the entrance gate where the visitors would alight a horse, elephant or carriage. Jillua Khana was more of a pre-formal reception area where guests were welcomed.

Mubarak Mahal meaning Auspicious Palace was built in an Indo-Saracenic architectural styles. It was also known as ‘Palace of Welcome’ and was constructed for greeting the royal guests. This two- storey mansion had huge rooms along with a reception hall that was designed with beautiful frescos and mural paintings. It was once an attractive reception hall.

This Baradari had a North-East to South-West orientataion. To the North was the Musi river while the East, West and South side was surrounded by Maula Ali Road. The Baradari was in the North zone on the bank of Musi river. It was one storied wooden Pavilion. Facing the north pavillion was a rectangular Hauz. To the north-east corner of the Pavilion was the two replica of Farid Bagh separated by a rectangular Hauz in between.

The middle area of the Garden consisted of rectangular plots of variety of plants, trees and shrubs. The pathways were made up of mud arranged in grid iron and organic forms

The South-West zone of the Garden consisted of Wahid Bagh which was a unique garden area for various species of flower.

In line with the Wahid Bagh, towards the centre there once present was a big octagonal water reservoir which provided water to the south area of the Garden. Facing to this Hauz was another square shaped Pavilion which was built on a high plinth and can be accessed through three-sided flight of steps.

JNPT wants architects to do interiors work for Mumbai office