Indian paint industry has oligopolistic structure with four top players controlling almost 80% of the market. Despite the existence of limited number of players, the high degree of pricing discipline exercised by the top four players is the hallmark of the industry. In the last five years, industry has seen price increase of just 2.5-3%.  In fact, in recent months, there were some price reductions by the industry, to pass on the benefits of softer raw material price prevailing.

Indian paint industry is one of the fastest growing and has been clocking double digit growth for the past several years. What’s more inspiring is the future prospects of the industry which according to analysts and experts is brighter due to several factors like unsaturated potential of housing sector, shortening repainting cycle, growing middle class population, conversion of kachha houses into pucca ones, transition from unorganised to organised market, etc. According to analysts, because of these reasons the industry is expected to register double digit annual growth for next ten years at least.

Despite being so attractive in terms of growth and profitability why the industry is oligopolistic? This is even more surprising due to the fact that the industry deploys simple technology and has modest capital requirements. To find out the reasons one need to look at the distribution side of the industry.  The paint companies are directly connected with dealers (retail outlets) which has created informal distribution-led entry barriers. A paint manufacturer supplies to dealers through depots located across the country. It takes years for any player to build a pan India supply chain. Remember, all of the top four companies have completed 75-100 years in India and the market leader, Asian Paints has 65,000 dealer network.

But competition is emerging

However, that doesn’t mean that efforts to breach the barriers have not been made all these years. Many efforts have been made and most of them have failed. However, there are at least three cases in recent years one can mention, which need to be noted for different reasons. The first one is Indigo paints which entered the market in 2000; second one is Nippon Paints, world’s 4th largest paint maker who entered the market in 2006; and the last one is the JSW Paints which made entry last year. While the first one is known for slow and steady approach, the second one is in the limelight for its aggressive strategy though it has not paid much dividend till now but the competitors have been taking note of it. On the other hand, the last player is known for deep pockets and also has some knowledge about Indian building materials market. 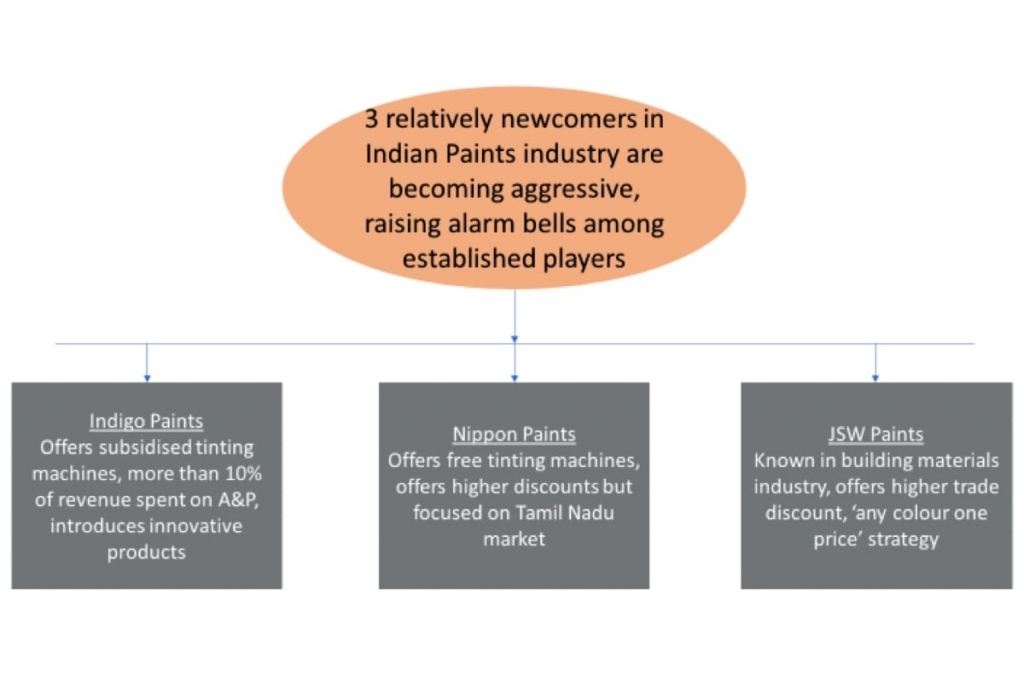 Indigo Paints clocked a turnover of less than Rs 600 crore last year, that is not even 5% of the turnover of the market leader. But, remember, it took 10 long years for Indigo Paints to cross Rs 10 crore revenue mark initially. Also, a point to note is that the company has rapidly increased its distribution network – it has 14,000 strong distribution network as against Kansai Nerolac’s 24,000. The company has seeded 4,000 tinting machines and plans to add about 1,500 tinting machines per year going forward.  These tinting machines are provided to dealers at a subsidized price of Rs20,000 and the balance is borne by the company. Despite its slow start, the company has started attracting the attention of other players due to aggressiveness the company has been showing in marketing since last two years. Nearly 10% of its revenues are invested in publicity as against 4-5% by the leading paint makers. Indeed, the company’s topline is much lower than others but the intent is visible. Its marketing efforts are suitably supported by the attractive product portfolio and as a result,  innovative paint products now account for 30% of revenues.

Nippon, on the other hand, is globally fourth largest paint maker but in India its still struggling to make its presence felts though it was launched in 2006. But of late things seem to be changing at Nippon as the company has been aggressively spending on advertisements and promotions which has provoked its competitors to act upon. Dealers in South India admit that aggressive marketing by Nippon has increased consumer awareness and driven inbound queries for its products.

It is not just TV commercials by Nippon but other marketing strategies by the Paint maker like pro-active efforts in adding new dealers have alerted its competitors. It seems Nippon has gone one step ahead and is offering tinting machines without any upfront costs, if the dealers agree to a minimum offtake commitment. Further, Nippon is reportedly offering higher dealer margin of 10-12% while the margins offered by the market leader is in lower single digits for regular products.  However, the company which has 50% more revenue than Indigo Paints is heavily concentrated in one state, that is, Tamil Nadu. For the time being the company doesn’t have Pan India plans as it will concentrate on increasing its profitability.

JSW Paints, the third player who has aggressive plans is hardly one year old but has made his intent clear by complaining with the CCI against the market leader. But unlike other players like Nippon Paint and Indigo Paints, JSW is a local player with deep pockets. Also, JSW is gaining foothold in building materials sector through JSW Cements. In fact, JSW Cements is making its presence felt in South Indian market by appointing dealers even in tier 4 cities and that too in a short span of time. Thus, it may not take much time for JSW Paints to gain foothold in decorative paints due to its past experience. Further, JSW is reportedly offering 3-5% higher discount to the dealers which may help the brand to attract more dealers.

With new players showing aggressiveness in their approach incumbent leaders have woken up from their slumber, especially, the market leader, that is, Asian Paints. As the paints is a low technology item, battle will be fought mainly on marketing front and that too in expansion of dealer network. The consumer, on the other hand, will be sitting pretty as he can hope to get products on easier terms than ever before.