Climate change is the price which developing nations like India have to pay for the historical excesses of the developed nations. But we have moved far away from the blame game scenario and the time now has come to act as it’s the question of survival of the mankind. India being a party to United Nations Framework Convention on Climate Change and its Kyoto Protocol and the Paris Agreement has its own share of responsibilities.

Under the Paris Agreement, India has submitted its Nationally Determined Contribution (NDC) outlining eight (8) targets for 2021-2030, including (i) to reduce the emissions intensity of its GDP by 33 to 35 percent by 2030 from 2005 level, (ii) to achieve about 40 percent cumulative electric power installed capacity from non-fossil fuel based energy resources by 2030 with the help of transfer of technology and low cost international finance, (iii) to create an additional carbon sink of 2.5 to 3 billion tonnes of CO2 equivalent through additional forest and tree cover by 2030. The other targets pertain to sustainable lifestyles; climate friendly growth path; climate change adaptation; climate change finance; and capacity building and technology.

As part of its climate action agenda, Government of India is implementing National Action Plan on Climate Change (NAPCC) comprising eight Missions. Of the eight missions, perhaps the most difficult one to achieve may be the National Mission on Sustainable Habitat which is formulated to make the cities sustainable through improvements in energy efficiency in building, etc. 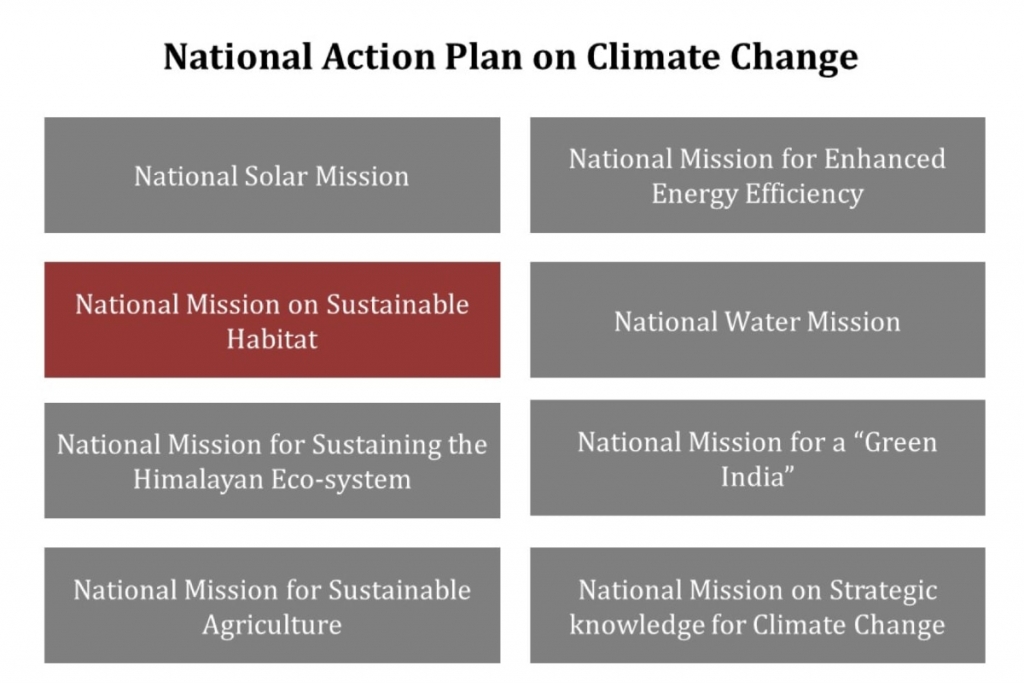 Energy efficiency in buildings becomes even more important as we move towards the economic goal of achieving $ 5 trillion GDP. The construction sector (including buildings) typically provides 5-10% of employment at national level and normally generates 5-15% of GDP. Thus, our economic goal can be achieved only if the construction sector is in good condition and it grows on expected lines. In other words, as India moves on to become a $ 5 trillion economy one can expect hectic activity in the sector and more specifically in the Buildings sector.

Building new houses will not be just India-centric event but will be a worldwide phenomenon. By the end of this century, the world’s population will have increased by half – that’s another 3.6 billion people to reach to 11.2 billion. To accommodate the increased population, the world needs to build 2 billion new homes over the next 80 years!

Building is an energy guzzler

Building construction and operations accounted for 36% of global final energy use and 39% of energy‐related carbon dioxide (CO2) emissions in 2017. The buildings and construction sector therefore have the largest shares of energy and emissions, even when excluding construction‐related energy use for transport associated with moving building materials to construction sites.  The global average building energy intensity per unit of floor area needs to be at least 30% lower than current levels. 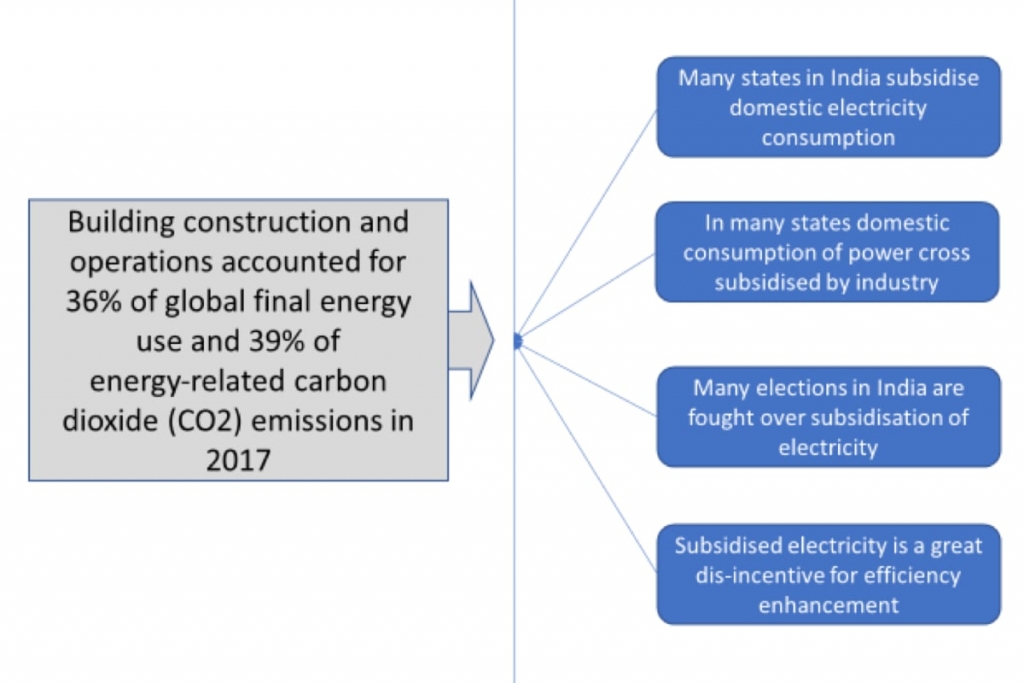 This is an uphill task for India where the Green Building concept has touched just the tip of the ice berg. Further, the government’s efforts to enhance energy efficiency in buildings, especially in residential sector, has been majorly neutralised by the policy of subsidised electricity in many states. In some states like UP, Bihar and Tamil Nadu domestic electricity consumers get substantial subsidy. In Many states they are being subsidised by others like industries and commercial power consumers.  When the cost of electricity is unrealistically low no one would be bothered as to how much electricity he spends or wastes.

Subsidy is often a political issue over which election battles are fought and won or lost. Thus, withdrawing subsidy is not an easy thing to do for the government, more so for the central government as it has no power over this as it is a state subject. Subsidy will have its impact both on efficiency and consumption and may derail whatever reforms the government planning to bring about energy efficiency in buildings.

However, there are certain countries that are taking some bold steps to overcome this challenge. For example, Mexico plans to eliminate electricity subsidies that discourage energy efficiency investments. India too need to take such strategic steps to avoid wastage and enhance efficiency.

Another area where challenge may be faced is in case of refrigerant based space cooling system. The shift in global fuel use in buildings is partially due to changing end‐use consumption, with space cooling and electrical appliance energy growth leading electricity demand growth in buildings. Space cooling energy use increased globally by more than 20% between 2010 and 2017, while appliance electricity demand grew by 18% and space heating decreased by around 4%.  Space heating energy reductions, given the large use of fossil fuels for heat production relative to other end uses, are also contributing to the larger share of electricity use in buildings.

According to experts, India’s annual air conditioner consumption is around 5million units which is not at all an eyebrow raising number. Experts point out that India and China were at similar income levels in the early 1990s. But today China has AC penetration level of 96% whereas in India its hardly 5%. Meanwhile, its also true that India has started reaping demographic benefits just now and it may not take much time for the per capita income to go up rapidly, consequently leading to increased discretionary spending. Further, non-availability of electricity in many parts of the country also acted as a deterrent to buy consumer durables like ACs. With electricity supply slowly improving in the country, consumption of electrical appliances and equipment will go up in the in the coming days. As the usage of ACs go up, electrical consumption too will grow making the government’s task of enhancing energy efficiency even harder.

The India Cooling Action Plan (ICAP) launched in March 2019 has a long term vision of reducing cooling demand across sectors by 20% to 25% by 2037-38. Since, its hardly one year old plan its too early to assess its efficacy in serving its objectives.  Meanwhile, the government has to find alternative ways and means of containing electricity consumption on ACs in the interim.

The government, thus has a tough task at hand as compared to transition from fossil based power generation to solar and wind power and also country wide afforestation programme. The problem is aggravated due to limited availability of time to achieve the goal. Therefore, government needs to take some tough decisions, especially on subsidy front, to achieve the goal.