April 7, 2020
Home
Spotlight
Will wood disrupt the way we build our homes?

Recently, France’s government declared that any new public construction projects financed by the state must contain at least 50% wood or other organic materials like hemp or straw by 2022. This new timber push is part of a broader plan to make urban life in France more sustainable. France’s announcement has come at a time when Western World is leaning towards wood as a preferred building material.

Wood in India – past, present & future

In India, wood based buildings are not a new thing though presently it’s the ‘concrete regime’ that’s ruling the construction sector. In pre-independence days wood was the main building material used for beams, flooring and staircases. Such buildings are there even today in many cities including Mumbai which have now received heritage tag. Apart from old buildings, wooden houses are preferred even today in hilly regions of Jammu & Kashmir, Uttarakhand and Himachal Pradesh.

Recently India’s first North American-style wood frame construction (WFC) house, made of Canadian wood, was built near Mysuru in Karnataka. Forestry Innovation Consulting India (FII), popularly known as Canadian Wood, had executed the project in collaboration with Pyramid Timber Associates (PTA) on the premises of PTA in Yelwal on Hunsur Road.  FII India’s team creates awareness about British Columbia wood products through seminars, exhibitions, networking events and media channels under the Canadian Wood name. There are several projects where Canadian wood has been used in construction for beams, doors, ceilings, panelling, etc. However, use of wood in buildings has come down drastically due to non-availability of hard wood. Further, most of the Asian nations like Myanmar, Laos and Malaysia have already banned export of hard wood. To that extent growth of wooden buildings in India is curbed.

Non-availability of wood has made the material expensive in India. Further, Indian weather can get extremely hot and humid. Fire and heat insulation etc., can become a problem in such climatic conditions. Termites and other wood eating insects deter the potential users from using wood as a building material though technology now can develop termite-proof wood material. 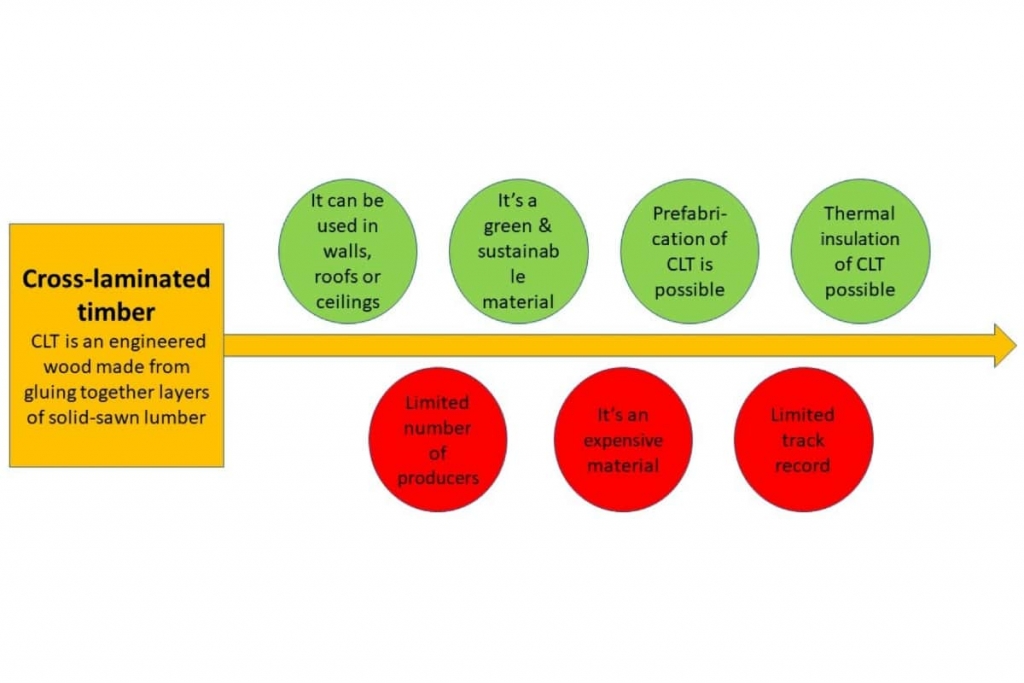 Green trees absorb carbon dioxide from atmosphere and give oxygen for us to breathe. So, when trees are cut these normal functions of the trees get disrupted affecting the environment. So, how can a wooden building be considered as a green building?

Grown trees absorb carbon dioxide from atmosphere and store them within, that is, in leaves, roots, trunk and branches. When trees decompose or burn, much of the stored carbon is released back into the atmosphere, mainly as carbon dioxide, and some of the carbon remains in the forest debris and soils. So, it’s important to see whether the cut tree is used as fire wood or used for products such as structural lumber or furniture. In the latter case, the carbon is stored for decades or longer. Experts point out that a typical 2,400-square-foot wooden home contains 29 metric tonnes of carbon, or the equivalent offsetting the greenhouse gas emissions produced by driving a passenger car over five years (about 12,500 litres of gasoline)!

When wood replaces a fossil fuel for energy or a construction material with a greater greenhouse gas footprint, this lowers greenhouse gas emissions. Apart from reducing the building’s carbon footprint by 60–75%, wooden skyscrapers are estimated to be around a quarter of the weight of an equivalent reinforced-concrete structure. Studies show that substituting a cubic metre of blocks or brick with wood results in a significant saving of 0.75 to one tone of carbon dioxide. Therefore, the experts suggest that increasing the use of wood products in construction and for other long-lived uses, plus the use of wood by-products and wood waste as biomass replacement for fossil fuels, can contribute to atmospheric greenhouse gas stabilization.

For Greens, wood not only acts as building material but also as carbon sink. They are an overlooked opportunity for a long-term storage of carbon, because most-widely used construction materials such as steel and concrete hardly store any carbon. Thus, it’s a case of hitting two birds with a single stone.